Even though Kinley is now a seventh grader, two years beyond our time together as student and teacher, I still get questions about what it was like to be my daughter's teacher.  People still ask me for more details about those two years.  So I decided to go back through the drafts I never got around to publishing and revisit Kinley's days in room 17.

Once when she was a fifth grader, Kinley had one of her classmates over for a sleepover. For other kids, a sleepover with a classmate is no big deal. But when Kinley invited someone from her class to come home with her, the poor guest was forced to spend the night in the bedroom next door to her teacher. How weird is that?

Over the whole two-year period that Kinley was in my class, she only had one other child sleep over. To be fair, our family IS gone a lot on the weekends. But I also think she knows how odd it would be for her friends to see their teacher in pajamas with no makeup. Creepy.

Another wrinkle in Kinley's weekend plans was that Kinley's chosen playmate, Madison, was a bit of a worrier. She even referred to herself sometimes as a Nervous Nellie, so I had cause to be concerned. Madison doesn't often spend the night with others unless she is very comfortable with the family, and I was sure that she'd be a bundle of nerves about staying overnight at our house since she never had before.

After school, Madison and Kinley played together at our house, and I tried to give them plenty of space.  I wanted to try to make it as normal as possible for both girls (and I tried not to be too vain about the whole pajamas and no-makeup thing). Before bed, I decided to address the big elephant in the room and asked Madison, "So, I know you don't usually spend the night with people very often. Are you going to be okay?"

She looked at me thoughtfully and then said, "I think I'm gonna be okay.  Ya know, I'm with you every day."  She had decided that her comfort level with me outweighed any weirdness about spending the night at her teacher's house.  Being with me actually made her feel more comfortable about being away from home!

I was so relieved since that meant that Kinley would get to have a relatively normal sleepover instead of some kind of awkward experience that would scar her for life.  For once, having her mom for a teacher proved to be an advantage!

Kinley and Madison have lunch with their teacher in Room 17. 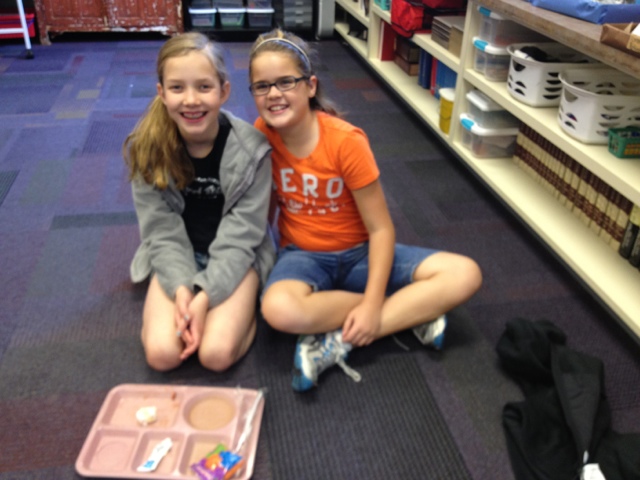 What a great idea--to go back and relive some of your experiences.

This one brought back memories of when I spent many nights with my friend Linda whose mother had been my second grade teacher. Linda and I didn't get to know each other until fifth grade, but it was still fascinating to me to see how my teacher's family lived.

This certainly brought back memories! I didn't know Linda when I was in her mom's second grade class, but when we became friends in fifth grade, I was fascinated to see how a teacher's family lived. I still remember what Miss Lila looked like in her nightgown with her long hair no longer in a bun. (She's still going strong, by the way, in her nineties!)

I can't handle how much younger Kinley looks in that picture. I wasn't ready for that!

I wasn't prepared for how much younger Kinley looks in that photo. Goodness!

I'm glad you all enjoyed my post! It's fun to be blogging again. And looking at pictures of Kinley at that age are surprising to me, too! She really has grown up so much in just two years!