Our class recently took a field trip to the Brownsburg Challenger Center in Brownsburg, Indiana.  This amazing facility leads school and civic groups in simulated space missions to develop teamwork and communication skills.  Before we go, the students learn about NASA missions (my step-father even comes in and talks about his years working for NASA on all of the Apollo missions), about the moon, and about the tragedy after which the center is named.  They learn about the jobs that will be avalaible to them on the mission and about the skills those jobs require.  Each child gets to work half of the day in the "Spacecraft" and half of the day in "Mission Control."  It's one of the top two learning experiences outside the classroom that my students have during their two years in my class, and I've been taking students there since my first year as the teacher of the Gifted and Talented class.

But I'd never done it as a parent of one of the participants before.

A few years ago when I took my class of 4th and 5th graders, one of my students was working alone in the clean room of the spacecraft.  This glass-enclosed room inside the spacecraft is where the students on the REMOTE team construct and "launch" a lunar probe.  Since the probe is sensitive, the REMOTE officers must wear protective gear and work in isolation from the rest of the class.  That particular year I had a very small class, and so one student was working on the probe in the clean room by herself.  She had a counterpart in Mission Control, and they were to communicate via headsets.  The problem began when the student in the clean room didn't notice the first direction on the flip chart:  "Put on your headset."  The poor girl wandered around inside the clean room aimlessly for 10 minutes wondering what to do next, eventually bursting into tears before Commander Krebs of the Challenger Center staff stepped in and reminded her to read her flip chart directions carefully.

Now, it was bad enough that the child was frustrated and that the other REM officer in Mission Control was trying fruitlessly to communicate with his Spacecraft counterpart over the headset.  But to make matters even worse, the parent of the child in the Spacecraft was standing outside the glass doors crying, too!  The poor mom was having a terrible time watching her frustrated, teary daughter, knowing that she couldn't intervene and come to her rescue.  I remember thinking, "Great day in the morning.  It's just a simulation!  Your kid is going to have to learn to be independent sometime!  Quit stepping in every time she has to think for herself!"

And now, several years later, here I was in a similar position.  Only this time, I'm the teacher as well as the parent.

Kinley was on the MEDICAL team and began her day in Mission Control.  I usually float back and forth during the day between the two rooms, observing my students and interacting with the parents who are watching from the back of the rooms.  But I had promised Kinley that I would hang out in the room where she was working.  When Commander Santner of the Challenger Center gave the instructions to, "Pick up your manuals and begin," Kinley sat there looking clueless.  She was looking around the room, checking out what everyone else was doing, and chewing her fingers (a habit she gets from her father).

I stared in disbelief.  "You've GOT to be kidding me," I thought.  "What is she DOING?  Why isn't she getting started?  Doesn't she realize that the MEDICAL team in the Spacecraft is waiting to receive instructions from her?  Didn't she hear the instructions from the Mission Commander?  Is she just going to sit there making me look bad all day???"

Half and hour before, when our class first arrived, Commander Santner had taken all of my 10 parent chaperones on a tour of the facility.  She had told them very specifically NOT to intervene during the mission, even if they saw the children struggling.  Learning to make decisions and take action while under stress is a valuable lesson, and at some point during the day, the kids would probably not know what to do.  But Commander Santner assured the parents that with communication and teamwork, the kids would be able to meet their goals and "Return to the Moon".

So then I tried the "Teacher Proximity/Parent Evil Eye" combo.  Maybe if I stood near her and glared, she'd figure out that she needed to be taking this more seriously.

Instead, she smiled at me and waved wildly.

Finally, Commander Santner noticed that the MEDICAL team wasn't yet illuminated on the mission status board, indicating that no action had yet been taken by the MED officer in Mission Control.  As she walked toward Kinley to help her get with the program, I decided I should probably spend the rest of the morning in the Spacecraft, far removed from my daughter's cluelessness.

Our "Return to the Moon" ended in success.

But the next time I take my class, I'll have much more sympathy for the teary mom outside the clean room. 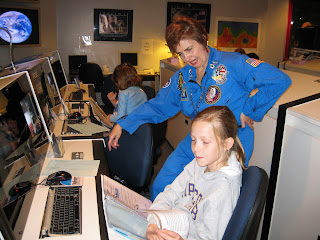 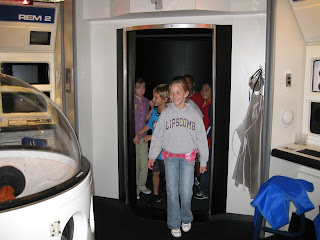 Kinley and her classmates enter the Spacecraft through
the airlock. 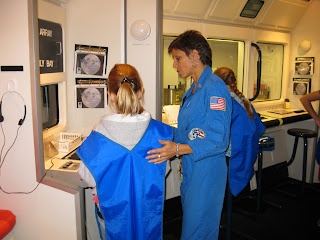 Commander Krebs helps Kinley figure out what she's
supposed to be doing in the Spacecraft (and later gives
me the you've-got-to-let-her-figure-it-out-on-her-own
speech.)  I LOVE this woman! 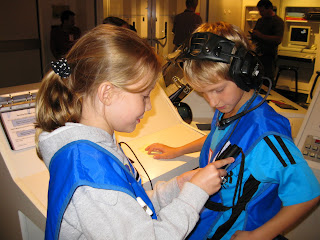 Kinley checks the COM officer's radiation exposure
in the Spacecraft. 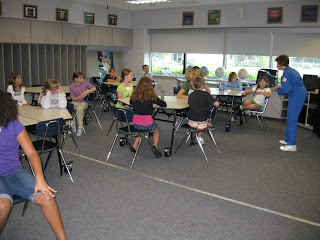 The class debriefs after a successful "Return to the Moon."
Posted by boyd2 at 12:29 AM 2 comments: