What Am I, Chopped Liver?

Kinley sobbed all the way to school this morning, after her bedside prayer for her brother to be fever-free today was evidently denied by God. Poor Knox had developed a high fever four days ago and just couldn't seem to shake it.  You may be thinking, "How sweet for her to be so concerned about her little brother that she would actually weep on his behalf!".

Well, you can stop thinking that, because she wasn't concerned about Knox. She was just mad because now her daddy was going to have to stay home with her sick brother instead of going on a field trip to the Indianapolis Symphony today with her.

From the size of the fit she threw, you would have thought that she was one of those poor children whose hard-working parents aren't ever able to get off work to go on class trips.  But she's not one of those kids.  Instead, of course, she's the ONE kid in the class who's had a parent with her on EVERY SINGLE TRIP OF THE YEAR!!!!

And that parent would be ME!!! Her mother/teacher. But to her, I don't count.  Somehow only Josh's presence counted today.

And to make it even worse, Josh DID go on a field trip with her...... LAST WEEK!  Yes, you read that right.  A mere five days ago, Josh put aside all of his other obligations and went with our class to the Indianapolis Motor Speedway which offers free tours to Indiana's fourth grade classes during April and May each year.  That means she had not one, but TWO parents on her last field trip, a privilege no other child in her class has had all year.

Kinley is far from deprived.  But she would beg to differ. 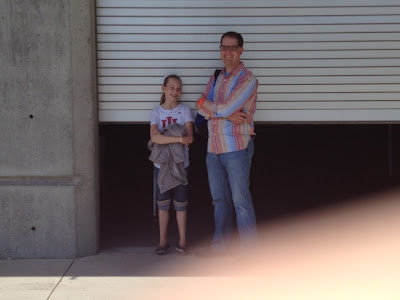 ﻿
Kinley and Josh were together in front of one of the garages during the Indianapolis Motor Speedway trip just five days ago.

Kinley's hystrionics this morning (and also yesterday, in anticipation of this problem) really got under my skin.﻿  Now don't get me wrong.  I'm not heartless.  I did feel sorry for her at first.  But I had only about a 10-minute window during which I was willing to overlook her pouting, moping, and whining.  She grabbed onto that window and clearly wasn't planning on letting it go any time soon, so I got irritated.

"Do you even remember that just a few days ago your dad went with you?" I shrieked as she sobbed on our ride to school.  "Oh, and let's not forget that I'M going to be with you today! But clearly that makes no difference to you!"

Sniff sniff blubber blubber from the backseat.  Between sobs she managed to squeak, "But Daddy NEVER goes with me!"

Really?  Did she really just say that?  Clearly her grief has clouded her memory.  So let the pictures below serve as proof that Josh does, in fact, go on field trips with this child. 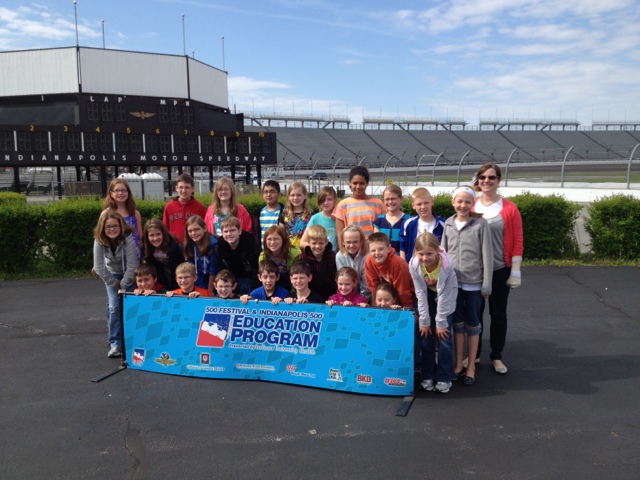 Mrs. Boyd's class poses for a group picture at the Indianapolis Motor Speedway.  Josh took the picture, so I guess this isn't proof after all. 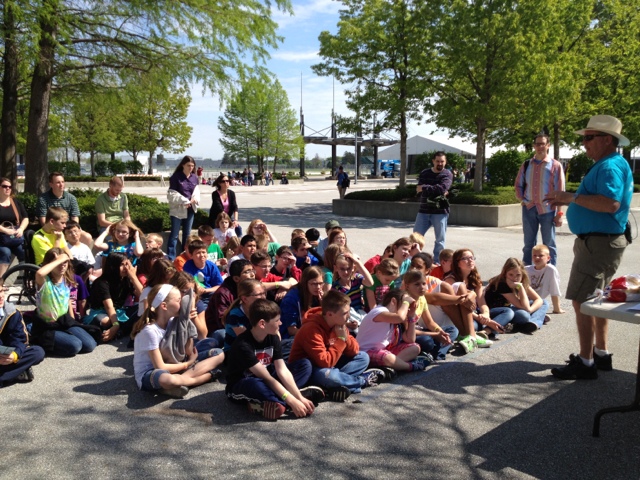 During the talk about the history of the Speedway, Kinley (seated on the left in a white headband) answered the question about why the winner of the Indianapolis 500 drinks a jug of milk.  (Notice Josh standing on the right, clearly present.) 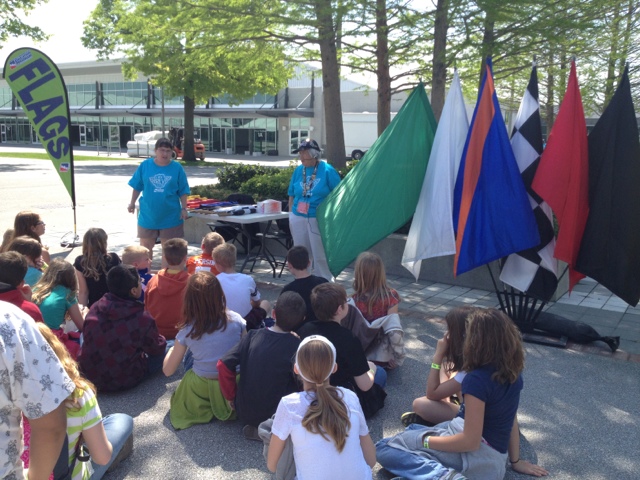 The students learn that each flag communicates a different message to the drivers.  Again, not a good "Josh" example. 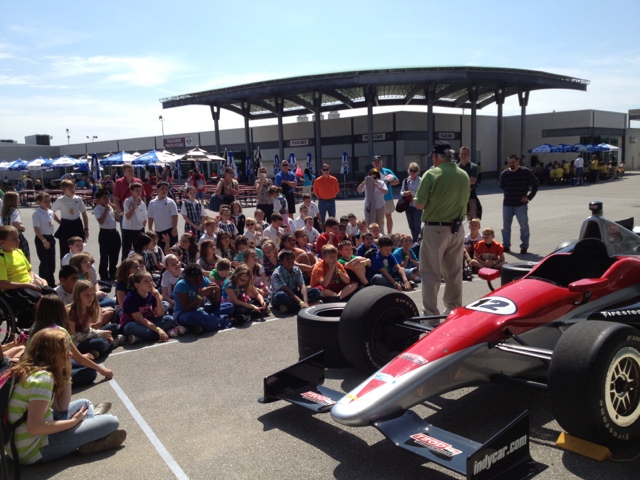 The kids hear a talk about the physics of Indycars. 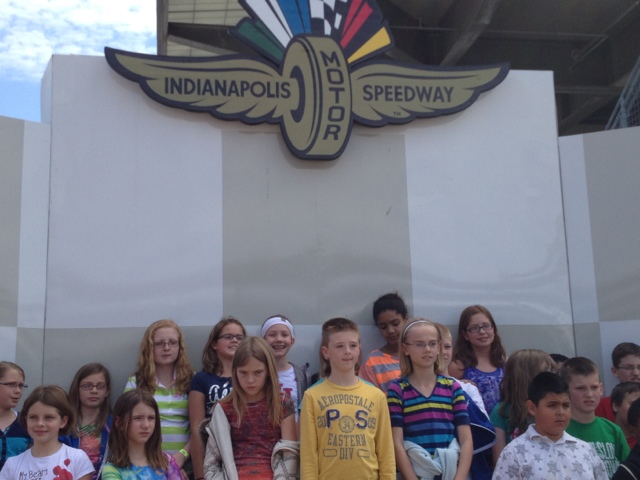 The kids got to stand on the winners' podium.

Given Kinley's clearly fragile state in the car this morning, coupled with the fact that preparing for field trips stresses me out, I decided to let her sulk in the back seat without further conversation.﻿  Once at school, I went about my business and left her alone in my room to pull herself together.  By the time I returned and other kids started to arrive, she was out of her funk.  I took attendance, organized parent chaperones, and then we loaded the bus.

On the bus, she first sat in a seat with me.  But after a few minutes, she decided to sit with a friend.  I chose to take this as a good sign that she had recovered completely. 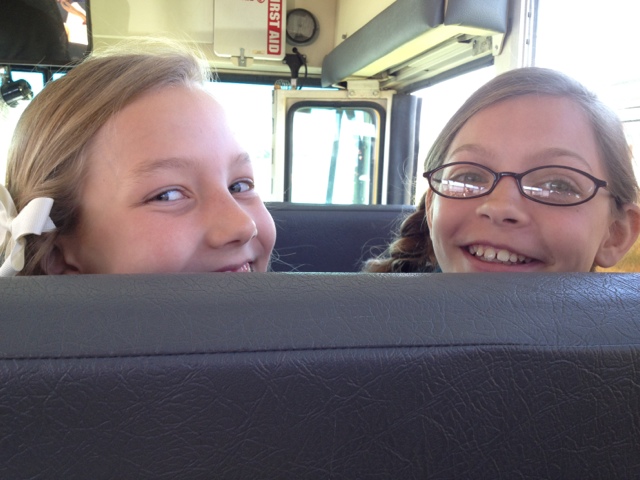 Once she got to sit by her friend on the bus, Kinley perked up a bit.

A few miles down the road, our bus started having trouble, so we had to pull over and wait for another bus.  In all the excitement, Kinley seemed to forget all about the apparent injustuice she'd suffered﻿ just an hour before.  Things were looking up! 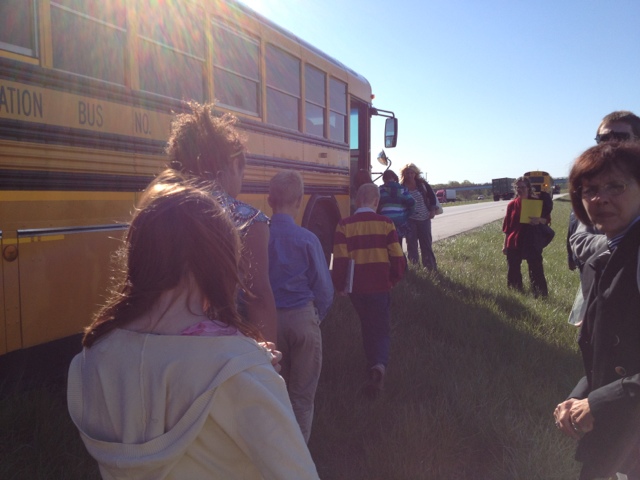 Our new bus has arrived! 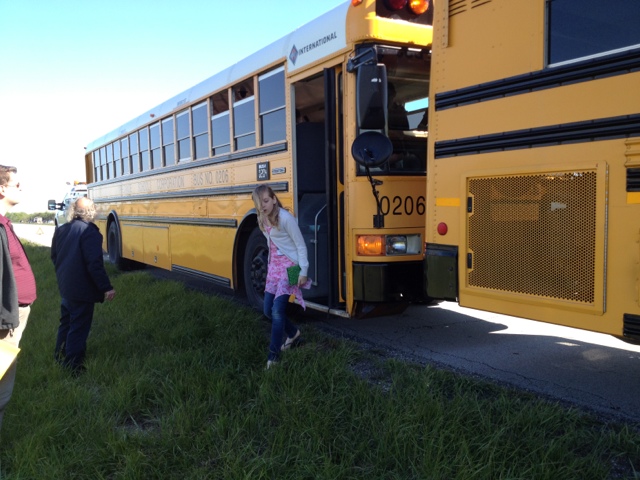 We disembarked bus 206 on I-65 after it began leaking antifreeze into the passenger area.

The bus change brought about a seat shuffle that meant that I was no longer seated near Kinley, so we ended up not sitting together once we arrived at the concert hall in Indianapolis either.﻿  She didn't seem to care in the least.

Having a little time away from her during the concert and the bus ride allowed me to get over my anger and gave her enough time to forget that she was crushed.  We ended up enjoying the trip and even sitting together during our picnic lunch. 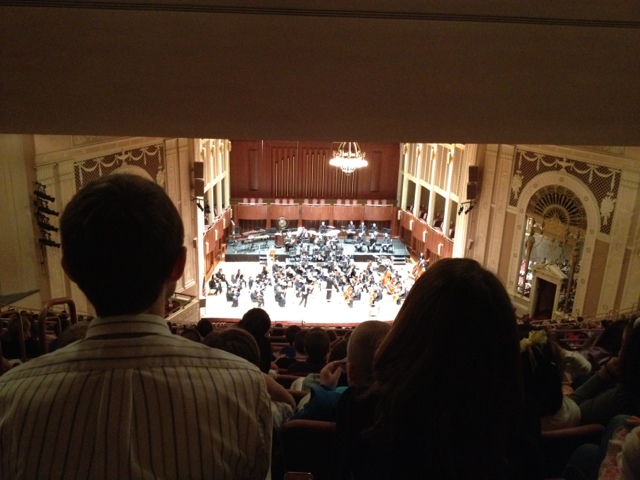 After waiting on the side of the road for our new bus, we arrived at the symphony with not a moment to spare.  The 45-minute symphony performance was lovely even if it was short. 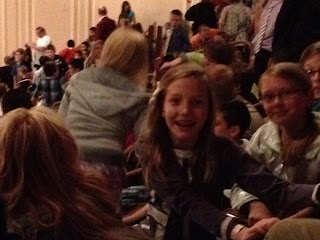 After the performance, we waited in the concert hall to be dimissed in the order we arrived (which, of course, meant we went last). 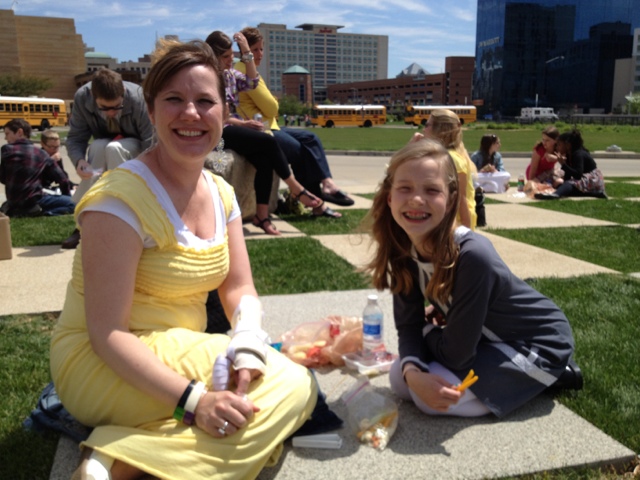 Kinley and I eat lunch together after the Indianapolis Symphony performance.

While we ate we talked about the concert and bemoaned the fact that we had to eat on the ground in dresses.﻿  Everything between us seemed to be set to rights again.

Until we got home.  As soon as Kinley walked into the kitchen and saw Josh, she had to remind him about how wronged she was.  She started in again on her whining and moaning.  She even dared to use the word never again.

But this time, I decided to let Josh listen to her.  I no longer had to be her teacher or her chaperone.  I wasn't trapped in a car or in a classroom or on a school bus with her.  I could escape and let HIM deal with her!  So that's just what I did.  I turned around and walked away, smiling to myself with satisfaction.